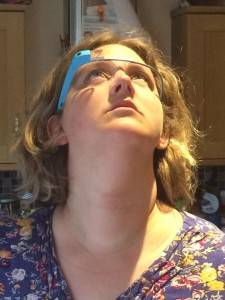 At K Sharp, we have had Google Glass now since just after it became available in the UK with a view to seeing how it performs and more importantly how it can be applied to future concepts (and importantly, it’s a cool gadget to play with).

So after a couple of months of using the device, what are our initial impressions?  The following is our initial view based on general exploration fo the product, not any specific application. The hardware, from an aesthetic perspective, is ‘interesting’, and I think that is being kind.  In a technology convention, yes it will be the thing to be seen wearing, but walking round the streets of a UK suburb, you do feel very self-conscious, not least of all because think is £1000.00 worth of electronics and the understanding that anyone could just grab it off your head and run is very clear.

When looking at the hardware capability, there are few complaints, a good camera and the build is quite robust.  From a user perspective, then a few minor flaws, firstly the inability to swap left and right may prove a problem for folks with eye dominance issues (shades of the film “wings of the apache”).  Also its not exactly clear what the few buttons do without reading the user guide (who does that with a new gadget).  The most perplexing at first was the button near the ear, but that’s because its not a button at all, it’s the bone conduction speaker.  That’s a brilliant piece of innovation, but on the basic usability level, it looks like a button! The display is very nice, clear and easy to read and the prism glass looks robust, certainly had no problems yet.

The weight of the projection/display is suitable and not too intrusive.  In terms of connectivity, having to link to both Bluetooth and Wi-Fi or use your mobile as a portable hotspot really seems to be a “hack” solution which is power hungry and inelegant. The cute innovation of the eye tracking camera which can detect the user winks is clever, but not infallible.  I have found myself not being able to take photos without a gross exaggeration or it taking photos just when I sneezed.  But I think this will get honed and in the main is a neat feature, though maybe slightly subversive. On the software side, new applications are being released all the time and these will improve. 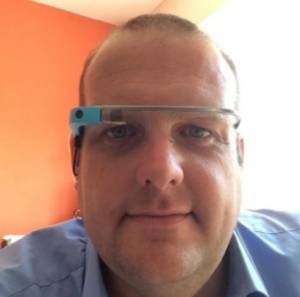 The basic roles of taking a photo, highlighting emails and tweets it does very well.   One of the best demonstration apps has to be the Star Explorer, especially when demonstrating it.  Getting a brand new user over the self-consciousness of saying “Ok Glass, Explore the Stars” is justified when the heavens are opened up to them. There is a lot of potential based in this equipment, and will be the subject of a much more rigorous review in the future, but first impressions are that it is an interesting bit of kit, but significant improvements need to be made to make this an everyday product.  That said, criticism aside, the ability to have a personal Heads-Up Display available to the general public is a great advance on the wearable technology front.

Evaluation Google Glass Head UP Display HUD
Got an enquiry?
If so we'd love to hear from you! Get in touch today...
Contact Us